The Tacoma Dome is one of the largest wood domed structures in the world. It is owned and operated by the City of Tacoma’s Venues & Events Department. Flexibility is the key to the success of the Tacoma Dome. With new state of the art telescopic seating and an extensive curtaining system, almost any event is possible. The unique configurations mean the Tacoma Dome can accommodate 1,000 to 21,000 patrons, making it the largest indoor venue in the state of Washington. 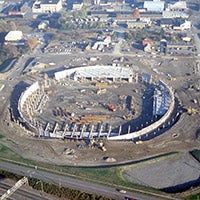 The Tacoma Dome's aluminum super-grid is one of the world's largest at 384' x 160'. The total cable length is approximately 47,661' or just over nine miles. There are over 275 support points on the Dome and the grid includes an estimated 2.5 miles of welding.

Built by and for the People of the City of Tacoma, Washington

"A dome is a major work of art. The perfect blending of sculpture and architecture in displacing
space. A dome is the most natural of all forms. A vault of man created in the image of a vault of
heaven." - Michelangelo

Over the last few decades, the Tacoma Dome has become an inextricable element of what
Tacoma is. Today, it’s as much a symbol of our city as buildings and bridges erected 100 years
prior. In honor of the Tacoma Dome’s recent renovation, we wanted to wind back the clock a bit,
and take a closer look at what it took to build this iconic structure.

To start things off, it’s worth noting the Tacoma Dome wasn’t the city’s first attempt at a
world-class indoor event space. In 1925, a bold idea was proposed to build a roof over Stadium
Bowl . At the time, it would’ve been the largest pillarless roof on earth. For various reasons, that
plan never came to fruition. Over the following half-century, at least half a dozen other similar
efforts were made.

Eventually the community’s desire for a “A dome of our own” outweighed any naysayers and in 1980, a massive effort was set in motion to rally the people of Tacoma under a common goal
of building the Dome. Hundreds of public meetings were set, every question was answered, and
the majority of Tacoma eventually came together to support the plan. Preliminary research
showed 70% of Tacomans were willing to vote yes on a bond proposal.

Mayor Doug Sutherland said in 1983, “We’ve talked about it, we’ve discussed it, we’ve cussed
it, voted for it and against it, and were never able to really conclude what the project should be.
In March, 1980 once again the citizens of Tacoma had a decision to make. Should we build a
dome of our own? The decision was a resounding yes.”

Since the concept of a dome in Tacoma wasn’t a brand new one, there were already well
shared ideas regarding its location. Downtown was a favorite spot for many, as was a site near
Cheney Stadium. Anywhere it went would have come with a certain amount of conflict, but the
overwhelming community support was enough to keep it alive. The neighborhood of Hawthorne
was eventually decided on as an ideal location. Some houses were literally picked up and moved, including one by water, while other properties were bought by the city and demolished. The Dome brought new life to the neighborhood that has carried on to this day.

Even from the earliest stages of this project, the planners had their sights set high. They didn’t
want to build a stadium to house a single type of event or sport. They envisioned “a facility that
has the greatest flexibility of any structure of its kind in the world.” Capacity during different
sporting events would range from 20,010 for motorcycle races and soccer games to 26,342 for
boxing and wrestling. Music performances, like the premier show by David Bowie, could max
out at 30,000 people; one sixth of the city's entire population.

Because of the high priority placed on versatility a dome shape, specifically a varax dome, was
a natural conclusion. The design for the Tacoma Dome was inspired largely by NAU’s Skydome
in Flagstaff, Arizona, though the Tacoma Dome ended up being larger. Within hours of the
groundbreaking ceremony on July 1, 1981, an army of earthmovers, bulldozers, and dump
trucks started work on the 40-acre project site.

Over the following 19 and a half months, the Dome took shape bit by bit. A half-million cubic
yards were removed to make room just for its footprint. In all, 260,000 square feet of concrete
blocks formed the outer wall. A 17,000 foot circular concrete beam, 3½ feet thick, joined the roof
to the wall. Contractors started on the roof in February 1982. The last corner of wood was nailed
in place by the following August, covering just over six acres of space.

The substructure of the roof was made up of 414 glulam beams with an additional 1,568 smaller
horizontal glulam purlins supporting the rafters. There are 18,798 bolts holding them together. In
all, 28,512 2”x8” boards were spread out on top of that. Each one was nailed in by hand using
323,150 nails. This was all covered by multiple layers of urethane insulation and sealant.
Since it was the taxpayers of Tacoma who paid for the Dome, it was only fair they all had a
chance to take part in its construction. So, in April of 1982, just as the roof’s substructure was
coming together, the citizens of Tacoma were given an opportunity to make a permanent mark
on the last 5,000-pound section of beams before being installed.

Thousands of people showed up and wrote their names and messages for future generations to
enjoy. They’re all still there, 150’ above the dome floor, for anyone with with sharp eyes to see.
The names of construction workers can be seen on the other beams already installed.
Subsequent visitors have also left their marks over the years, reaching carefully from the
dangling catwalk.

Once the roof was complete, work on the interior became a whole lot easier. The space within
the walls, from the field and convention level to the upper seating, covered 434,699 square feet
and every bit of it was being worked on by someone. The amount of concrete poured in the
Dome could have built a sidewalk from Tacoma to Everett. If the rebar was laid out end to end
starting from the Tacoma Dome, it would reach the outskirts of Spokane.

The Dome’s world record status as the largest wooden dome only lasted a few years, but it’s
outlived a number of its contemporaries, including Seattle’s Kingdome. Today the Tacoma
Dome stands as a prominent symbol of what the people of Tacoma are capable of when they
come together for a common goal. Just ask anyone whose names are up there on the rafters,
including us.

For 38 years, more than 25 million people have enjoyed world-class entertainment and events at the Tacoma Dome. In the summer of 2018, the Dome was enhanced with more than $30 million in capital improvements focused on making the live experience even better for guests and shows.

Come see for yourself. We look forward to welcoming you to the revitalized Tacoma Dome!